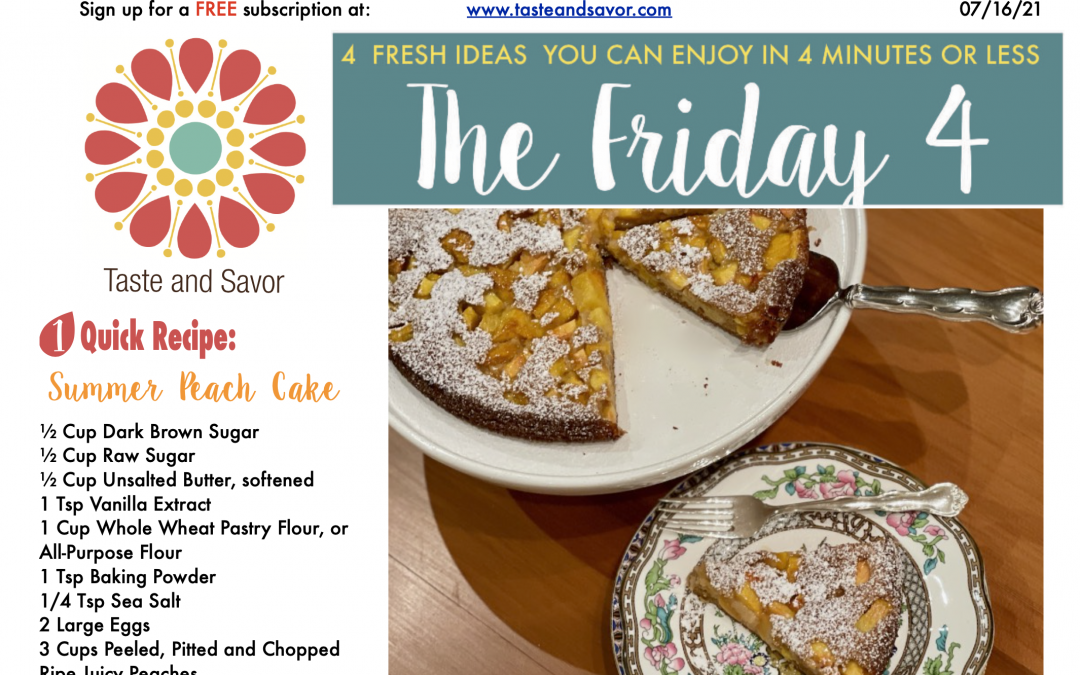 Preheat the oven to 350F, and oil spray a 9-inch springform pan, or a deep nine-inch cake pan. Line the bottom of the pan with parchment paper

In a large bowl, (or bowl of a standing mixer), add the brown sugar, raw sugar, and butter in the bowl of a mixer and beat until fluffy, about 2 to 3 minutes, making sure to scrape down the sides of the bowl. Add the eggs to the mixture, one at a time, and add the vanilla, mixing well.

Whisk together the flour, baking powder and salt in a medium bowl. Add the flour mixture to the mixing bowl and beat at medium speed just enough to combine – don’t overmix.

Scrape the batter into the prepared pan, using your spatula to even it out to ensure the cake fills the entire pan. Spoon the chopped peaches to cover the top, and slide it into the preheated oven. Cook for 40 to 45 minutes, until the top is golden brown. Remove from the oven and let cool in the pan. When cool, run a knife around the edge of the pan before removing the cake. Place on a plate and sift the powdered sugar on top.

Peaches are at their peak from June until late August, so enjoy them now in many ways from sweet to savory! They make a great addition to dinner off the grill, and they are a super way to add a pop of sweet flavor to a tangy bbq sauce. Or add them to your charcuterie platter by wrapping each wedge in a piece of prosciutto – yum!

This easy cake reminds me of a “shortcake” so instead of its dusting of powdered sugar – or in addition to the sugar, its a super candidate for a dollop of whipped cream or a scoop of vanilla ice cream.

Mildly effervescent, with a light floral aroma and flavors of peaches and apricots, this Moscato is the perfect pair for a naturally sweet summer peach cake. Moscato D’Asti is from the same region as the more famous red wine, Barolo, but its on the other total end of the wine spectrum. Nicely fruity sweet and light in weight, its chilled bubbles are lovely at the end of a meal.