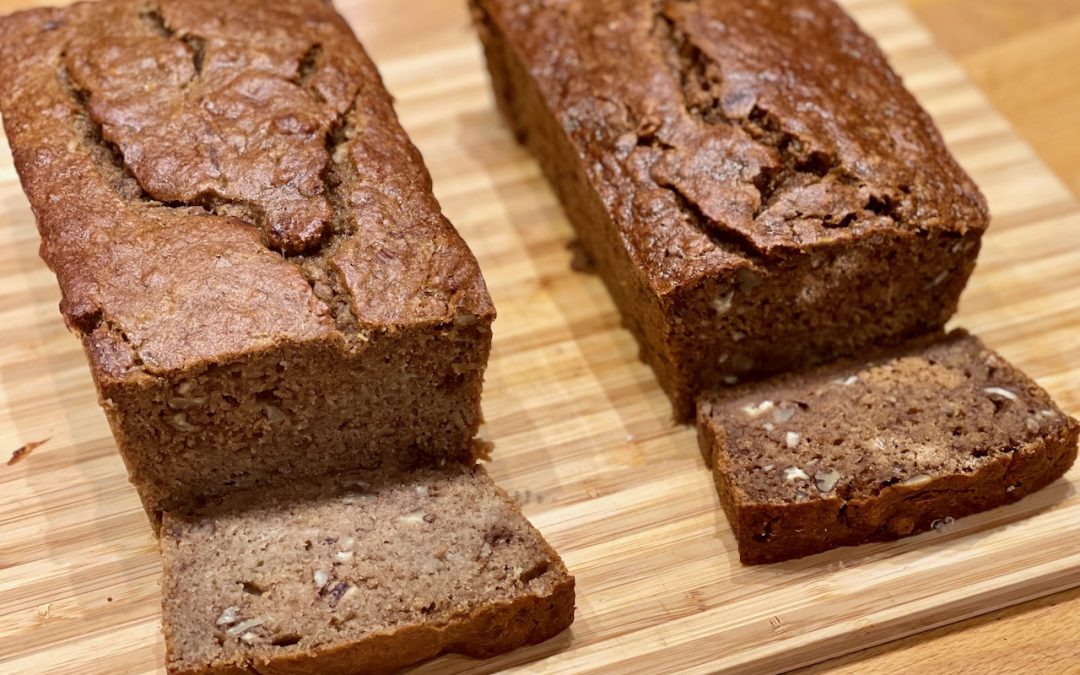 The Winning Banana Bread? Hands down it was the one on the LEFT in the photo – using cannellini beans as half the fat in the recipe. Hey! There’s nothing wrong with butter, but if you can amp up the veggies and protein in a sweet treat why wouldn’t you? (The right loaf was sweeter and had a denser texture.)

Preheat the oven to 350F. Spray a 9 x 5 Loaf Pan with avocado or olive oil spray and line the bottom with parchment paper.

Add the bananas to the bowl of a stand mixer* to make a “cream” of the bananas. Beat for about 2 minutes until the mixture has few lumps in it. Scrape out of the mixer into a small bowl and set aside – no need to clean the mixer.

In another bowl, whisk the flours, soda, salt and cinnamon together. Set aside.

Add the butter, beans and sugar to the mixer bowl and cream together on medium speed until smooth, about 2 minutes. Add the eggs, one at a time, beating after each addition. Beat in the yogurt, “creamed” bananas and vanilla until well combined.

With the mixer on low, add the dry ingredients, mixing just until combined – don’t overmix. Fold in the nuts. Scrape the batter into the prepared loaf pan and bake in for 60 – 70 minutes or until a toothpick inserted in the middle comes out with just a few crumbs. Allow the bread to cool completely before slicing.

*You can make this bread with a hand mixer – just add banana and later ingredients to a large bowl that you are using the hand mixer in.