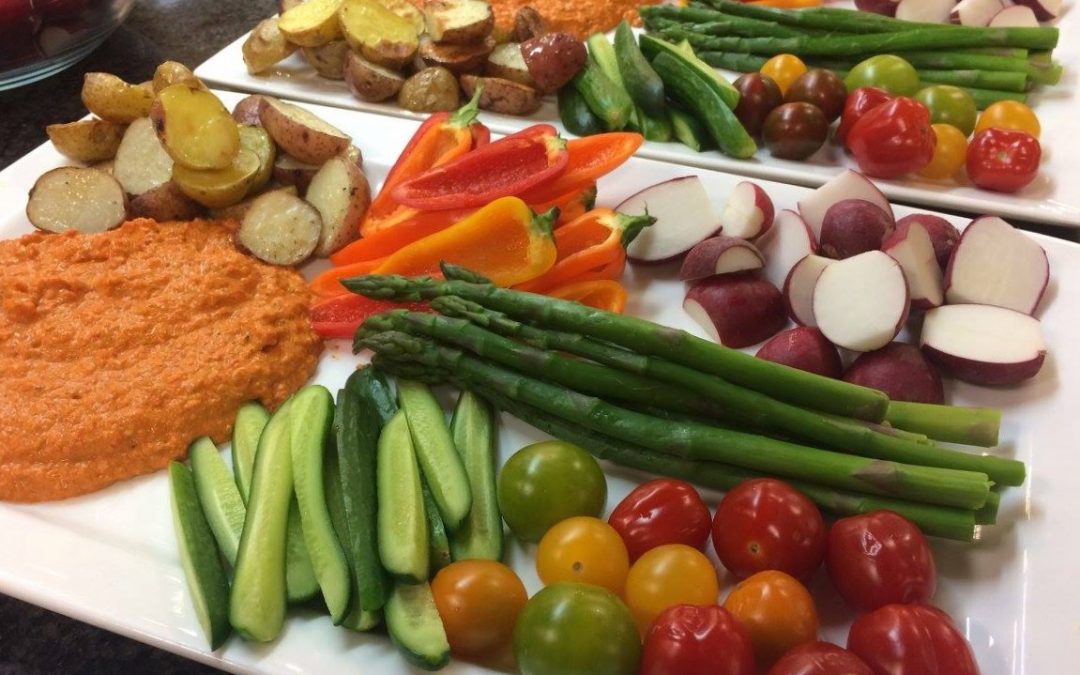 The weather turning beautiful, Georgia Asparagus and Radishes rolling into the store make us what to serve up dippy dinners with lots of veggies. We’re shaking it up with not only blanched asparagus, but creamy red potatoes that we’ve roasted i the oven. Toasty red peppers, lemon juice, sherry vinegar and a pop of smoked paprika make this traditional Spanish sauce one that we return to again and again. Super with almost anything – from toast to seafood, veggies to chicken, once you try this luscious dip you’ll make a double recipe and freeze half for later. Good News – it freezes great!

Smoked paprika makes this so smoky and rich tasting. Bonus? Its good for you too! The pepper is the similar to the kind that makes Hungarian paprika flavorful – but before the pepper is dried and powdered – its smoked! Yum. Even a small amount of this spice brings some health benefits to your table. Paprika has four carotenoids; all four function as antioxidants, but the first two are converted into the form of vitamin A that is used in the eyes to turn light into vision and is needed to produce the protein that makes skin.  It also has capsaicin in the spice. That is the active ingredient in chili peppers that causes their heat. In laboratory experiments, capsaicin relaxes blood vessels, which lowers blood pressure, according to research published in the August 2010 issue of “Cellular Metabolism.” Remember, just a single 1-tablespoon serving provides ample amounts of several beneficial nutrients! That is the exact amount used in this recipe so enjoy!

On a baking sheet, toast the almonds in a 350F oven for 10 minutes. Set aside to cool.

Cube the bread, and place in a bowl with the vinegar for a few minutes.

In a food processor, grind the almonds, add the vinegar and bread, the peppers, tomato paste, lemon juice, paprika, salt and pepper. With the motor running, slowly add the olive oil. Taste for salt and pepper and serve.