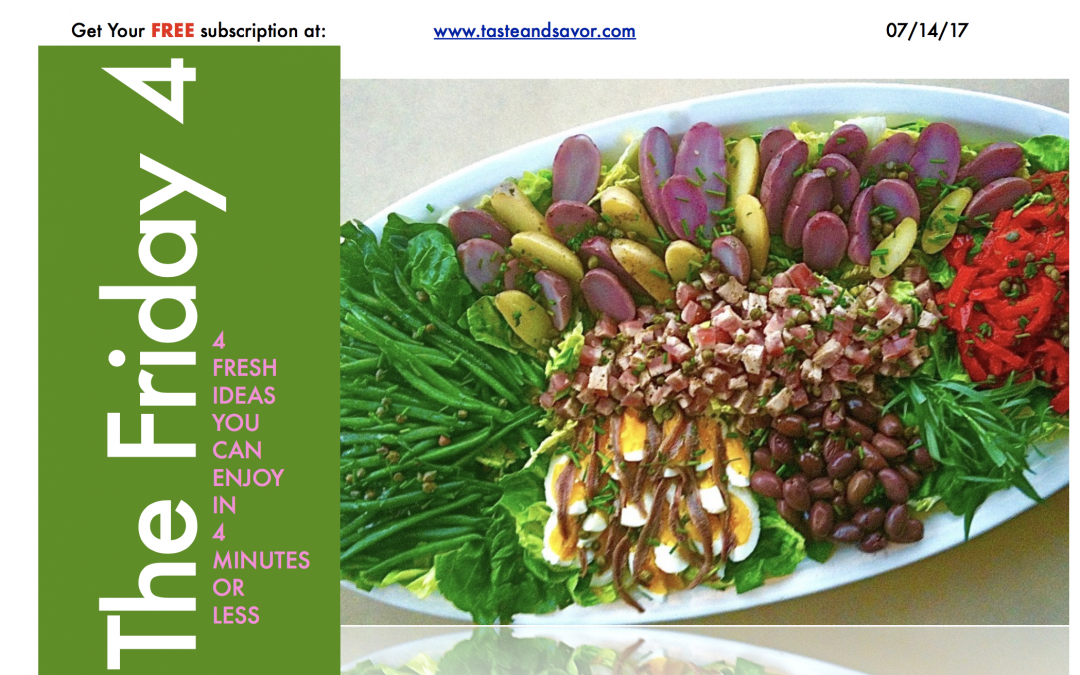 Preheat a cast iron skillet or ovenproof skillet over high heat. Brush the tuna with the olive oil and salt and pepper it well. Sear the tuna on both sides until brown. If you would like the tuna to be less rare – after searing, place the pan in a 350F oven until desired doneness. Cut  the tuna into ½” pieces. *You can also make the salad with canned albacore tuna.

Tear the lettuce and place it on a platter. Arrange the potatoes, eggs, green beans, red peppers and olives around the edge of the platter. Lay the anchovies over the eggs. Mound the seared tuna in the middle.

Sprinkle the capers and chives over the salad. Drizzle with Tarragon Vinaigrette. I love sharing this salad!

Shake the ingredients together in a jar.

Salade Nicoise is a classic Provencal dish that sings with flavor and color, and is a great source of delicious nutrition. Not only are the brightly colored veggies beautiful – they are full of fiber and antioxidants. Plus, the tuna and anchovies are super sources of omega 3 fats and the capers contain quercetin, a potent anti-oxidant.

Make a “Pan Bagnat” out of your salad by tearing open a piece of baguette, moistening the bread with just a little of the vinaigrette and tuck some of the the salad inside.

Rosé is typically enjoyed with Nicoise salad in Provence – so how about a gorgeous rosé from the Cotes de Provence region to pair with YOUR salad? Redolent with the aromas of ripe strawberries, light citrus and summer melon, this easy drinker is super paired with warm weather salads and veggies.