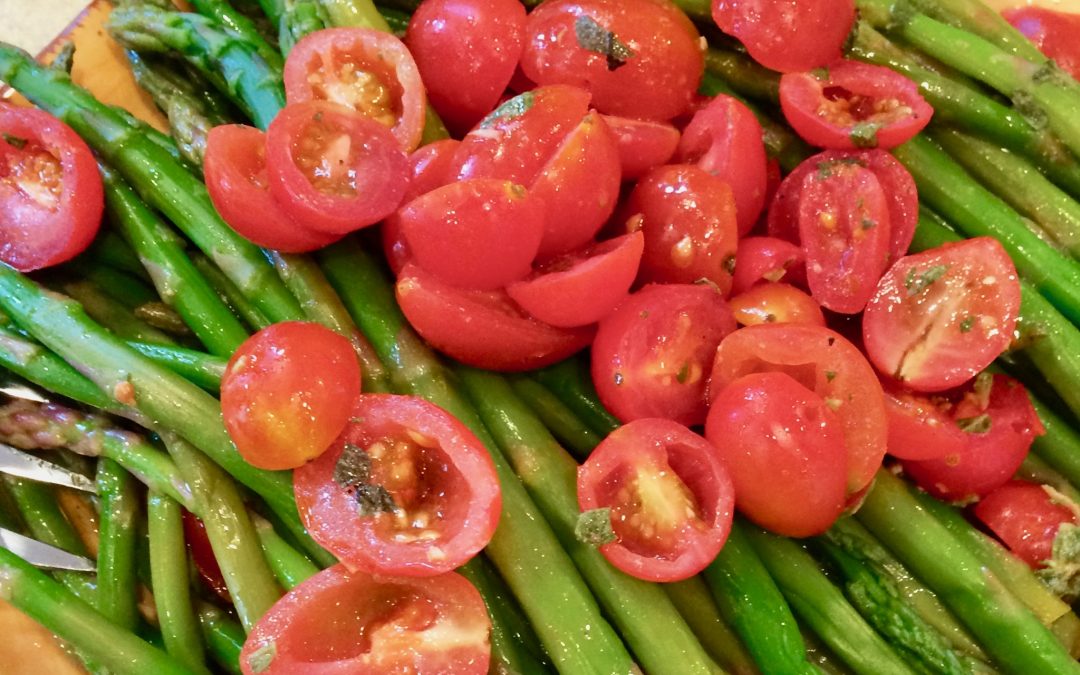 It’s the Asparagus Time of the Year! In Georgia, late April is when the bright green spears begin appearing in our local farmers markets. Thats when asparagus is on the table, whether in our healthy teaching kitchen or at home.

Tarragon is a super herb to pair with the flavors of spring, especially when you are creating a flavorful side or appetizer like this one. With a slight flavor of anise and a bit bittersweet it pops when combined with green veggies, fish and especially lemon.

Tarragon is called the “King of Herbs” for not only its flavor but its nutrition, too! Tarragon has long been used as a digestive tonic because it aids in the production of bile by the liver. Not only can it improve natural digestion, but it has also been found to relieve common digestive problems like an upset stomach or irritable bowel. WOO HOO – Bring on the tarragon!

Step One Cut the woody ends off the asparagus – you’ll know where to cut by looking at the green color. When the ends start losing color and becoming lighter or whiter, that’s where to cut. **Bring  about 2″ of water to boil in a large sauté pan. Add in the salt. Add the asparagus in one layer and bring back to a boil over high heat. Cook for about 2 – 3 minutes or until the asparagus is still firm. Remove from the heat and arrange on a platter. (Depending on the size of your pan, you may need to do this in two batches. Don’t overcrowd the pan or put the asparagus in more than one layer.)

Step Two Add the oil, shallot, honey, mustard, tarragon and the lemon juice to a jar and shake well. Season to taste with salt and pepper. Sprinkle the grape tomatoes over the asparagus and drizzle the platter with the dressing.

**Have you ever cooked asparagus like this? Much easier and faster than in a stock pot. Try it and see if you don’t agree.