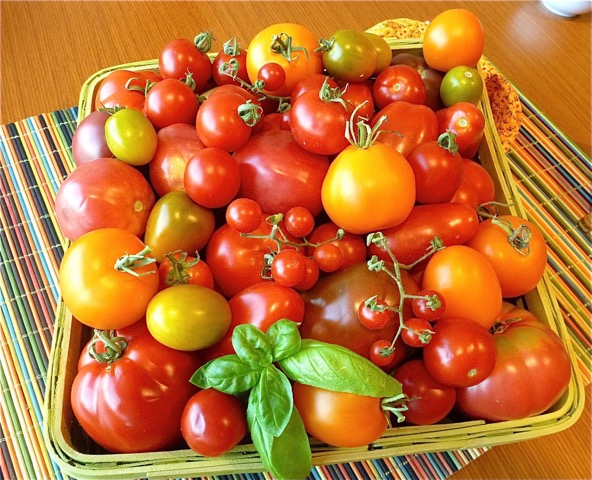 Oh yes, the picture above is
not from today, this week, or even this gorgeous Southern spring season. It’s
simply a fond memory of tomatoes from summers past. Ahhhhh. In my perfect
world, tomatoes would be in season all year round. Here above the *gnat line in
Georgia, we usually start getting local tomatoes in June, with the season
running all the way to late September. I call this recipe, a “cheater” – it
cheats the bland out-of-season tomatoes by roasting them in a hot oven, so it
concentrates their flavor.
I mentioned this bruschetta
during a segment on Atlanta & Co recently, and received more than one email
from viewers who asked for the recipe. (I’m not the only one who loves, loves,
loves juicy good tomatoes!) So I have taken the time to write down the recipe
that I use so often – its an easy go-to for an appetizer or even lunch and
dinner. Smear a little hummus on the bread before you top it with the tomatoes,
it’s a super lunch. Serve the tomatoes on top of whole wheat penne pasta and
garnish freshly grated Parmesan, dinner’s done.
Roasted Tomato Bruschetta
2 – 3 LBs Plum or Roma
Tomatoes, halved, (If its summertime – feel free to use what ever kind of ripe
tomatoes you like)
3 TB Extra Virgin Olive Oil,
plus more for drizzling or spraying the bread.
2 TB Balsamic Vinegar
1 Tsp Grated Garlic
Sea Salt and Freshly Ground
Black Pepper to taste
1 Baguette, preferable whole
wheat
Basil Leaves, in chiffonade,
(thin strips) for garnish.
Step One
Preheat the oven to 425F.
Place the tomatoes, skin side up on an aluminum foil lined sheet tray and slide
them into the oven. (This is the time to use non-stick aluminum foil – its
expensive, but worth it when you are roasting “sticky” tomatoes.) Roast the
tomatoes until the skin is browned and blistered and tomatoes are very tender,
about 30 minutes. Cool tomatoes on the pan, leaving the oven on.
Step Two
While the tomatoes are cooling, cut the bread into diagonal slices and
sprinkle or spray with olive oil. Sprinkle with salt and pepper and slide into
the 425F oven. Cook until golden about 10 minutes – flipping halfway through
the time.
Step Three
Scrape the tomatoes into a
bowl with the olive oil, vinegar, garlic and a sprinkle of salt and pepper. (They
will fall apart if they are cooked correctly.) Toss well and spread on the
toasted baguette slices, garnishing with basil.
“Above the gnat line in
Georgia” – isn’t that a funny saying? The gnat line starts in South Georgia and
runs all the way up the state until it reaches Macon. The gnats we are talking
about here are the itsy-teensy black insects that seem to appear out of nowhere
in the spring and summer. Mitchell County in Georgia even holds an annual
festival called Gnat Days – and that my friends, is a great example of turning
lemons into lemonade!