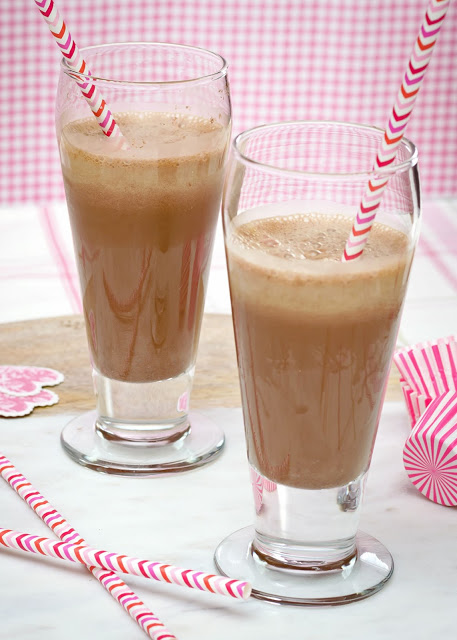 What? You don’t know the
date of National Chocolate Mint Day? Honestly, neither did I. Until a bottle
of Brancamenta, a minty-fresh herbal liquor appeared in my mailbox.
Accompanying the bottle was a note asking me to try it, and if I liked it as
much as they thought I might, to develop a drink recipe using chocolate and the
minty goodness.
I have strong opinions on
chocolate and mint. I never liked the ubiquitous slices of “grasshopper pie”
that appeared as dessert at the Ole Miss sorority house. I’m not a fan of
chocolate mint ice cream, and the venerable creamy grasshopper drink doesn’t
entice me at all.
So, what to do? I turned to
my true chocolate-mint love – deep dark almost bitter chocolate with the fresh taste
of mint. Adding the herbal kick of Bracamenta just makes it better. Less sweet,
richer, more interesting, more grown-up and less ice cream cone sweet.
I went to the kitchen to
discover the best, most interesting combo of flavors. My eureka moment was when
I mixed up a batch of milkshakes. An Adult Chocolate Mint Milkshake was born.
It’s not hard to finish an easy, delicious, not too sweet and full of flavor
creation from the blender. After my taste taster gave his verdict, (as a chef
its wonderful to be married), I packed it up last week and carried it
everywhere!
On Monday, I was a guest on
Atlanta & Company. Of course we had to end our Valentine’s Day segment with
a Chocolate Mint Milkshake. On Wednesday, I served it up
to a “Girls Night In” class at the Thomas F Chapman Family Cancer Wellness
Center at Piedmont Atlanta. On Friday, my friend and fab
food photographer Chloe Clark took glamour shots, right before I served it up to a group of
friends.

Creamy without the cream, only
5 ingredients, full of big chocolate mint taste, here’s the recipe for you to
enjoy!
“Adult” Chocolate Mint Milkshakes
3 Cups Ice
1 Cup Almond Cashew Milk,
(unsweetened)
¼ Cup Unsweetened Cocoa
2 TB Powdered Sugar
Dash Vanilla
2 TB Bracamenta (Italian
Mint Liqueur)
Add the ice and remaining
ingredients to a high-speed blender. (Use the smoothie feature on your blender
to make a drink the consistency of a milkshake.)
And just because I love that
bitter-chocolate-mint taste, I couldn’t resist coming up with another recipe.
This one is not a drink, but a luscious dessert, one that my classes have been
unable-to-resist. Its fudgy, a little better for you, and easy to make. If
you’re into eating gluten free this cake fits right into your lifestyle. Chocolate Mint Quinoa Cake
2 Cups Cooked Quinoa (3/4 Cup Dry Quinoa, cooked and
cooled)
1/3 Cup Unsweetened Almond Milk
2 Large Eggs AND 4 Egg Whites
1 Tsp Vanilla Extract
1/2 Cup Grapeseed Oil
1/4 Cup Unsalted Butter, melted
1 Cup Fine Raw Sugar
1 Cup Unsweetened Cocoa Powder
½ Tsp Baking Soda
1 ½ Tsp Baking Powder
1/2 Tsp Fine Sea Salt
*Chocolate
Mint Frosting*
Step One Preheat the oven to 350°F and line a 9×13” pan
with parchment paper and coat with nonstick spray. * Place the can of
Coconut Milk in the freezer.
Step Two In a blender, combine the eggs, almond milk and vanilla and blend to
combine. Add the quinoa, oil and butter then blend until smooth.
Step Three Sift together the dry
ingredients in a large bowl. Add the wet ingredients in the blender to the bowl
and whisk together until just combined. Scrape the batter into the prepared pan
and bake for 30 minutes. Remove the cake from the oven and allow to cool
completely.
*Chocolate Mint Frosting
1 (13.5 ounce) Can Coconut milk, taken from the
freezer
10
Oz Dark Chocolate Chopped
1
– 2 TB Bracamenta
Melt
the chocolate in a sauce pan over low-medium heat. Remove the coconut milk from
the freezer but don’t shake the can or turn it upside down before opening.
Scoop out the solid part and put it into the pan with the chocolate. Melt the
coconut and chocolate together, remove from the heat and add the Bracamenta.
Transfer the mixture to a large bowl that you can whip it in later. Allow to
cool in the fridge for several hours, until thickened. Once it has thickened, remove from the refrigerator
and beat on high for about a minute, or until fluffy. Frost the cooled cake and
return it to the fridge until serving.
By the way, the date of International Chocolate Mint Day is February 19th.
I was sent the bottle of Bracamenta to review – but would never do so if I didn’t
like it. I think you will too!