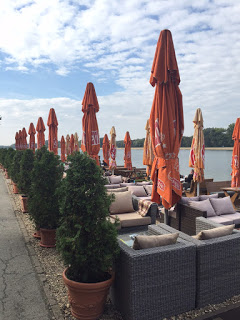 Serbia is beautiful, with a continental climate that means warm sunny summers and lots of sun in the winter. So much sun that there are places like these in the pictures below – right in the middle of Belgrade, Serbia’s largest city. 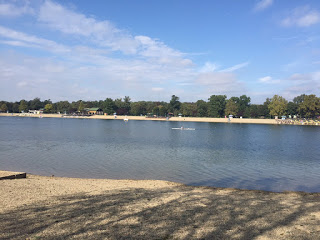 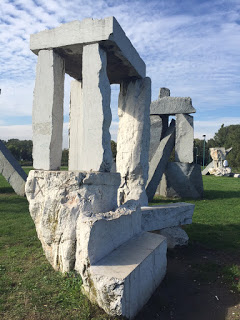 And ski resorts like Kopaonik in Southwest Serbia, the country’s winter playground, are only a five or six hour drive from Belgrade. 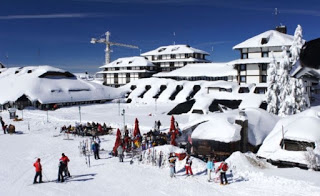 It’s very European-feeling. If you are comfortable walking the streets of any major city in Europe, you will be fine strolling in Serbia’s largest city center in Belgrade. Another bonus? Many people speak English. Well… not fluently. And not everyone speaks up quickly. But you will be surprised at how many can help you find your way in the busy area of shops and restaurants. You’ll hear music you can sing along to – American pop songs – in all the “trendier” places in town.
If you want a coffee or a glass of wine, you can pause at any number of cute cafes or bistros, with a décor that feels international, hip and clean. Don’t be surprised to see celebrities enjoying their drink, too. Belgrade is a popular spot to shoot films and TV shows. 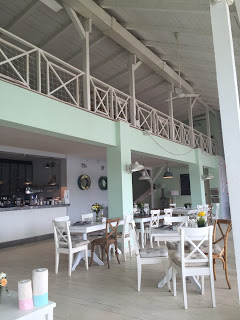 I WAS the only person taking pictures of my plate before diving in. Do make sure that you ask before taking pictures. With Serbia’s past still looming large in many people’s minds, they often don’t want their pictures taken. But to my delight – I found they love the pictures of their culinary efforts.

The traditional food is irresistible. Yes, it’s a little heavy on the meat-centric side. But if you are a fan of Mediterranean cooking, you’re going to find a lot of delicious med-style dishes full of peppers, onions and garlic. 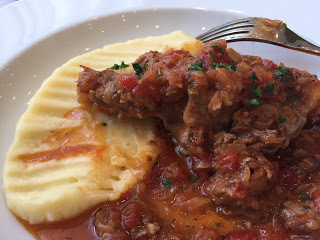 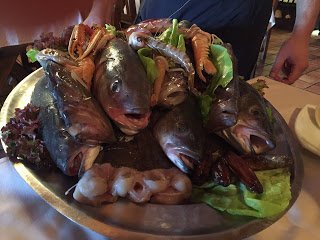 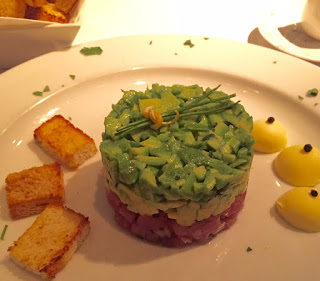 And OH! The cheese! 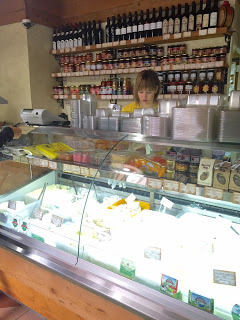 I could find my way right around the grocery store, its similar to our familiar layout. Just like my local Kroger, the good stuff was pretty much on the perimeter of the store. The produce section was large, and the meat section big, too. And the dairy section was huge, with lots of different cheeses and yogurts. I wanted to try them all. 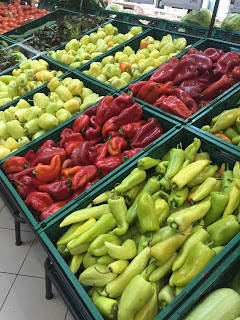 Of course, one of my first stops upon arrival was a large green market in Belgrade. Local farmers sell their wares every day, with especially large participation on the
weekends. Their food was gorgeous and displayed beautifully. 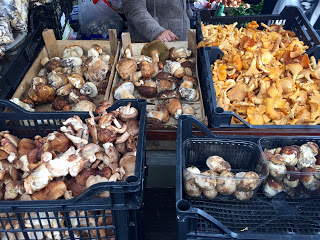 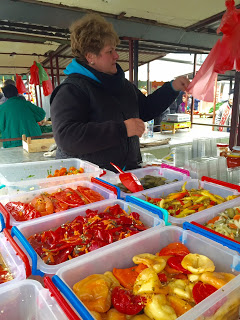 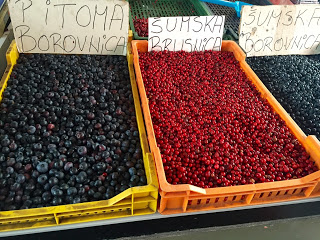 The wine has been getting lots of international attention. Serbia has more than a few indigenous varieties of both red and white, but many international varieties are grown. Wines are made from grapes like Chardonnay, Sauvignon Blanc, Merlot and Cabernet Sauvignon. Here’s a short and good intro to Serbian wines 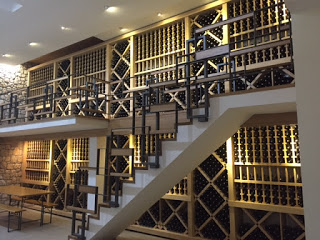 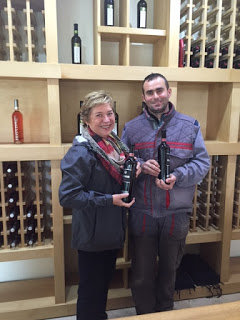 Wine and spirits are sold everywhere! And there are big wine departments in the grocery stores. Great sections of Serbian wine, of course, but the rest of Europe was well represented, too. Wines from the “good old USA”? Not so much. I did find Woodbridge Zinfandel and Chardonnay in a couple of stores. 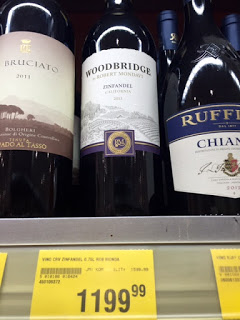 And speaking of spirits, the national drink of Serbia is rakia (ROCK-e-ah). (I am convinced that is the Serbian word for jet fuel!) Although it’s a popular alcoholic drink in the Balkans, Serbia is the world’s largest rakia producer and drinks more rakia per capita than any other country. If you’ve ever tasted a French eau-de-vie or a Grappa from Italy, you have an idea of the flavor of rakia. 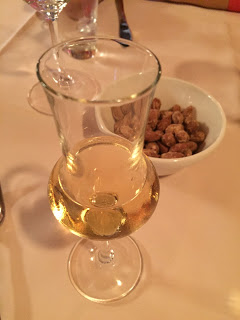 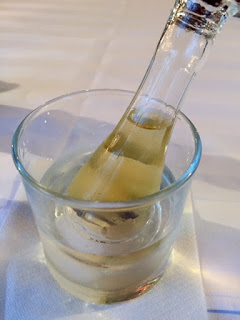 The 40% alcohol drink is made from the whole fruit, the flesh and seeds, instead of just pits and pomace like grappa. This means it has more fruit flavor. I enjoyed apricot, quince, plum, wild pear, and grape rakia. At a very upscale restaurant, I was even served a chamomile tea flavored Rakia – made with grapes and tea!
Rakia is served as an aperitif, throughout the meal and as a “digestif”. I loved the different presentations of the drink, from the traditional small bottle in a glass of ice to a shot glass, or even in a pretty little after dinner drink glass.

Hey,
I bet you didn’t know that there’s even a

There’s lots of fun activities and sports in Serbia. Biking is BIG! The Danube Bike Trail (DBT) passes through Serbia and bears the designation EuroVelo-Route
6 which means that it lies on the European Cyclists’ Federation (ECF) Atlantic – Black Sea route.
For exploring, Serbia has five national parks that are members of European EUROPARC national parks federation.  Serbia also has a great tradition of spas and
wellness, with a large number of health resorts located near cold and warm mineral springs. I experienced a relaxing facial, mask and mani-pedi. AHHHH…
There are lots to see and do. The people of Serbia are SO proud of their country. They are happy to see tourists and anxious to guide you to their favorite spots. 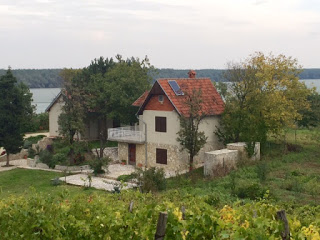 Beautiful old buildings surround you in Belgrade, along with poignant reminders of the turmoil Belgraders have experienced in the past 100 years. For site seeing – there are UNESCO World Heritage Sites to visit like the Studenica monastery, Stari Ras and Sopoćani, and the Mediaeval Monuments in Kosovo and Gamzigrad
– Romuliana.

You’ll find everything familiar in hotels and houses. The kitchens are equipped much like ours in the USA. I found the refrigerators to be almost full size, although not everyone has a dishwasher. Coffee makers, (Nespresso machines most often), toasters, waffle makers and microwaves are all used. You will often find a washer and/or dryer or combo in the kitchen or bathroom – they don’t usually have separate laundry rooms. Many people even in the swankiest neighborhoods still hang their clothes and linens to dry. I’d forgotten how divine it feels to fall into a bed with air-dried sheets. Wow…I am all for a comeback of that tradition! Bathrooms are big and spacious with showers and very euro-centric showerheads and nozzles. 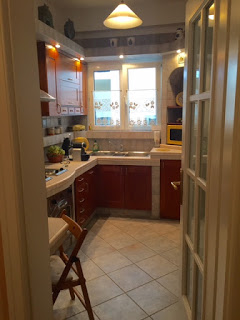 It’s inexpensive! I was wowed by the quality of food and service for the cost. You can count on prices for most tourist activities to be a third to a half of the
cost of other European countries or the US. The currency is the Dinar, and Euros or Dollars are easy to exchange in the major cities. I used my Visa card, (with a chip), almost everywhere in Belgrade.

And did I mention, I did a little dental work while I was there? Oh yes. I even got my American dentist on board before I went. She was encouraging – and sent my xrays to me – I took them with me and was extremely pleased with the results! When I arrived in Serbia on a Saturday, I had my first appointment with the dentist. He even called in the technician that made my three new porcelain crowns. ON Saturday! I left the following Saturday with three beautiful new teeth and two new fillings. All that dental work for less that the cost of a single crown in the USA. Needless to say, I’m now a fan of “Dental Tourism”! 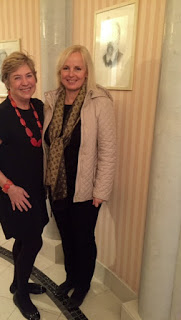 And the bonus is…

Serbia is easy to fly to from the United States. I took Lufthansa to Frankfurt Germany, and then on to Belgrade. The Belgrade airport was easy to maneuver and easy to find my friend, Biljana, who was there to greet me when I arrived.
I was so lucky to have a fabulous hostess for my first visit to Serbia. (If you read this Biljana – I can’t wait to host you in the states.) But, I’m ready right now for a return trip to explore more of your fascinating country, its culinary and wine traditions and lovely and warm people.