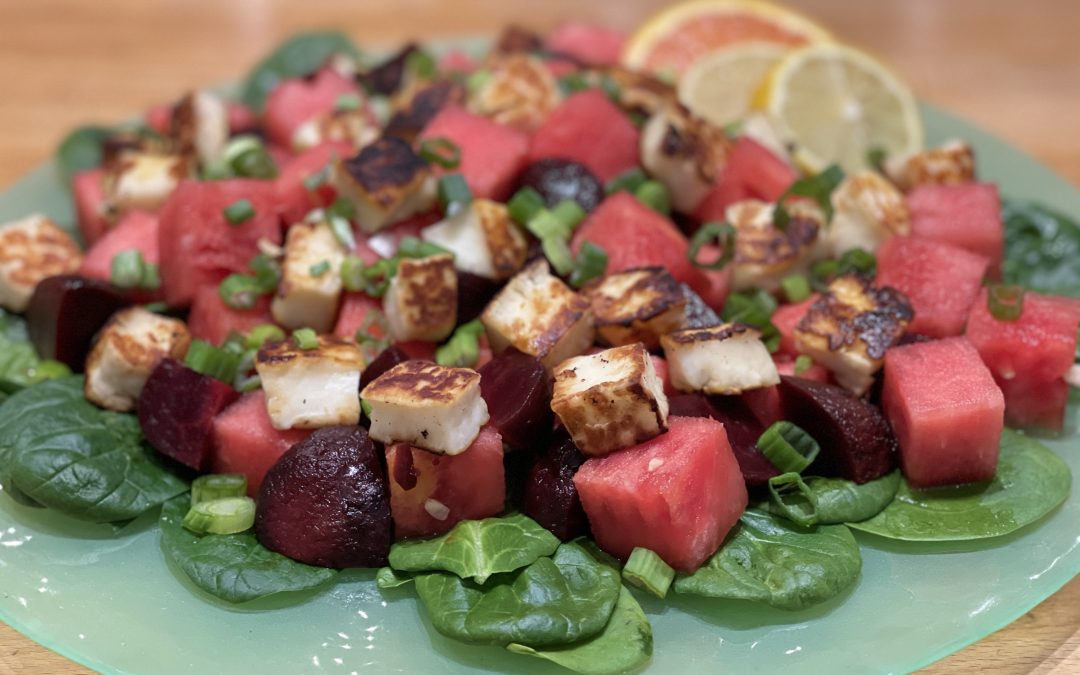 Have you had Halloumi? Its the delicious cheese from the eastern Mediterranean that we often find in Greek restaurants. Halloumi has a distinctive chewy texture similar to Indian paneer and has a very savory. salty flavor because its brined in a salt water solution. You’ll often find it served up warm and toasty in sandwiches or salads – it can be grilled without melting because  it has been cooked twice.

Halloumi can be purchased in the regular grocery store – its about an eight ounce,  5 inch block of cheese, 1 to 1 1/2 inches thick. It will be packed in plastic, in brine traditionally, and you may see some green specks in the package. Don’t worry! This is very traditional, its mint that’s been added to  preserve the cheese. (My friend from Turkey says it also “freshens your breath”). Halloumi may be made with sheep, goat or cow’s milk.

I use Halloumi in this salad, as I’ve enjoyed it in the Mediterranean in fruit salads as well as tucked into a pita pocket with fresh greens. Adding to the flavor of the salad are watermelon and beets – a funky combo, and not one that pops to the top of your head immediately. But the earthy and sweet combo not only looks beautiful, but tastes fabulous, as well.

Step One Clean the beets well, if you have beets with greens, cut them off and reserve. (You can use like any other green in salads, as a pesto, or in soups or stews.) Place the beets in a square of aluminum foil and drizzle with olive oil, sprinkle with salt and pepper. Place in a 425F oven and roast for 45 minutes or 1 hour until tender. Set aside until you can peel, and peel if necessary and cube the beets – about the same size as the watermelon.

Step Two Open the halloumi, pat it dry and cut in 1″ cubes. Sear the cheese in a cast iron skillet  over medium high heat until golden brown, or grill the cheese.

Step Three Layer the spinach, then watermelon, beets and cheese on a platter.  Drizzle with dressing and garnish with the green onions.

Shake the juices, zest, mustard and olive oil together in a jar and season to taste with salt and pepper.