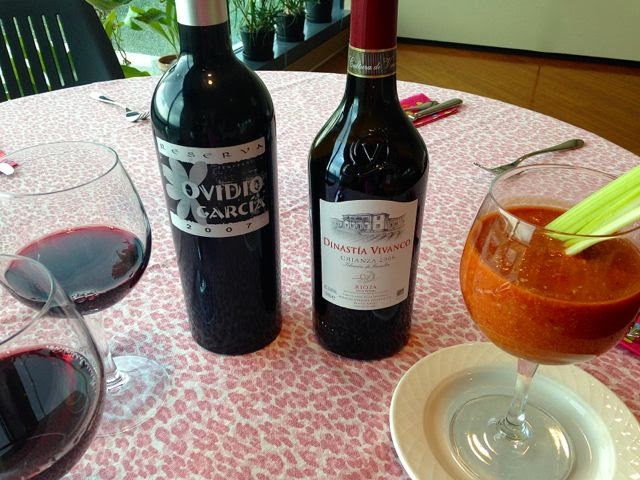 Most people are surprised
when I tell them that gazpacho was originally made WITHOUT tomatoes. Yes, it’s
true. The oldest version of Spanish gazpacho is thought to be from the area
around the city of Cordoba, and was made with bread, garlic, oil and water! It
was pounded in a mortar and pestle to combine the stale bread with the rest of
the ingredients. Today we whizz up our chilled soups with a immersion blender
or vita-mix, creating that perfect texture we’ve learned to crave during the
hot summer months.
Fresh, perfectly ripe
tomatoes didn’t end up in the mix until after Columbus. Once tomatoes were
added to the mix, peppers appeared too, and a market basket of other veggies
appeared too – cucumbers, avocados, mushrooms and even fruit versions made of
strawberries and watermelon. My favorite is still the traditional, after 1492
version. Tomatoes roasted red peppers, sherry vinegar and smoked paprika all play
important roles in my healthy, delicious soup translation.
What to drink with gazpacho? A Spanish wine of
course. My suggestion may surprise you. Not a crisp limey tasting Albarino, but
a light bright red Tempranillo. You may be familiar with this grape as the lead
varietal in Rioja, Spain’s famous oaked-medium-to-high-bodied-mouthfilling wine
that can be aged for many years. Or maybe you’ve had wine from Ribera del
Duero, a newer, trendy region of Spain? Here’s the really good news about this
widely diverse grape. It’s easy to find, can be inexpensive, and without long
oak ageing, it can be an effortless quaffer, with lower acidity and sparkling
fruit flavors.
To test my theory, I asked four friends who love
wine to taste both a young Rioja, called a Crianza in Spain, and a big hearty Tempranillo
aged in lots of new oak and full of the taste of jammy dark black fruits and
leather. (To see what leather smells like, stick your nose close to a leather
chair or sofa. Breathe in deeply and hope no one else can see you.) The same
grape, made in two different places in Spain, and vinified in quite contrasting
ways.
We had whipped up a recipe of gazpacho earlier
that day, so we were ready for our tasting… We tasted the wine, noted its color, aroma,
flavors and finish and then moved on to the soup. Not to my surprise, when we
returned to the wine, the younger fruity glass scored 5 out of 5 votes from our
group. The acidity of the vinegar and tomatoes and the punch from the paprika
smoothed out the wine and made it even more delicious. A lovely pairing like
this wine and soup made the start of the evening even better.
Here’s the recipe and the wines for your own
tasting.  I bought the wines from Costco
here in Atlanta, but both are widely available. The Dinastia Vivanco was under
$20, the Ovidio Garcia Reserve about $30. I chose the former because it was
such a good value, and I am a pushover for affordable young Riojas, (they are
very food friendly), and the latter because the guru of wine scores, Robert
Parker gave it high marks. I found it to be just the kind of wine he likes –
big, round and jammy.

Cooling Summer Gazpacho
This looks like a lot of ingredients, but its super
easy to make, and worth the time!
2 LBS Roma Tomatoes, halved and roasted under
the broiler until blackened
2 Slices Rustic Whole Grain Bread, chopped
3 Roasted Red Peppers
2 Cups Peeled English Cucumbers
1 Cup Chopped Red Onion
2 TB Tomato Paste
¼  Cup
Sherry Wine Vinegar
¼ Cup Extra Virgin Olive Oil
1 Garlic Clove, Peeled
1 Tsp Ground Cumin
1 Tsp Smoked Sweet Pepper
1 – 2 TB Lemon Juice
Sea Salt and Freshly Cracked Black Pepper to
Taste
Place all the ingredients in a large pot, except
for the lemon juice and salt and pepper. Using an immersion blender, puree
until your desired texture. (I like mine smooth – but you may like a chunkier
version.) If it is too thick, you can add some cold water to thin it out. Add 1
TB of lemon juice and taste for salt and pepper. If desired, add the remaining
lemon juice. Place in the fridge for at least an hour, the flavors will mingle
as it becomes cool. You can store the soup for up to 5 days in the fridge. It
freezes great, and you can double the recipe, too.