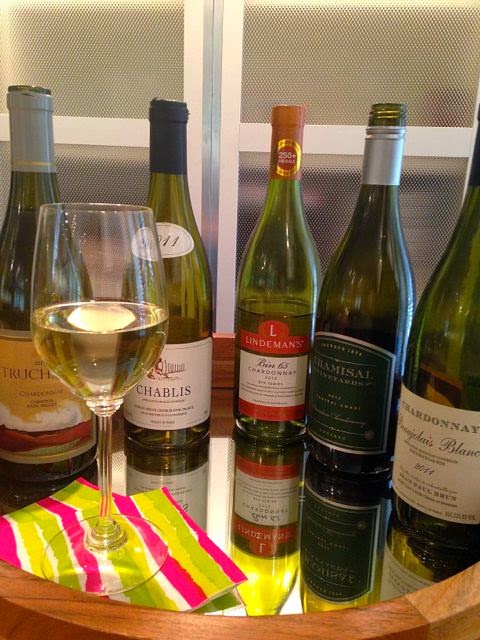 Did you celebrate National Chardonnay Day this week? The group that gathered last night claimed the 23rd as the day to celebrate according to the website National Wine Days. Food and wine was brought by all, and as I opened the door, one of our friends handed me some brown bags. He proposed a wine challenge. Never one to pass up the opportunity to taste and learn, I rounded up the wines, opened them and readied the group for the fun task.

Five identical numbered brown bags held five different Chardonnays – two French, two Californian and one from Australia. I handed out index cards and we began the “hard work” of identifying which wine came from what country. Lots of laugher ensued as we started at one end and worked down the wine lineup.  As a wine professional, I know that the more people enjoy wine, the more interested they become. Our friends were no exception. Five tastes, five opinions and five bottles quickly dissolved into lots of questions of typicity, (that’s a geeky wine term that refers how a wine measures up to the characteristics of a particular wine from a specific location), vintage and oaked versus non oaked wines.

After more teasing and tasting, we finished and I revealed the results, removing one brown bag at a time. A big cheer went up as all the tasters pegged the first Chardonnay as California. Not only had all the tasters guessed correctly, they all loved the wine. Truchard Chardonnay is from a family-owned producer of estate grown reds and whites in California’s Carneros Region of Napa Valley. I’ve had the opportunity to visit Truchard, and its land is gorgeous, the people, (and felines:), friendly and all the wines are just delicious. Most guessed the second wine – a Chablis from France. Many of us remembered the BIG jugs of “Chablis” that were a prominent feature of parties that our parents threw in the seventies and eighties. What fun it is to learn that Chablis is made from Chardonnay, and thankfully, doesn’t taste anything like the watery, sometimes sweet, sometimes acidic liquid that “claimed” to be the famous wine of Northern Burgundy. This Chablis from winemaker Francois Servin is textbook Chablis – crisp and clean flavors of apple and tropical fruit are dominant and delicious.

Number four was an unoaked Chardonnay from the Central Coast in California, Chamisol. You may think, as some of our tasters did, that California Chardonnay is always oaky tasting with flavors of butter and cream. You’d have probably identified this wine as French… However, this winery vinifies its grapes in stainless steel which creates a wine with a creamy mouthfeel and makes it sing with crisp apple, tropical fruit and yummy acidity.

A Beaujolais Blanc from Burgundy was our final wine. I threw it into the mix as a ringer. Evil, I know. I couldn’t resist. Although most of the group scored by choosing France as its provenance, not many think of Beaujolais as more than a bubblegum-flavored-publicity-stunt wine that is served up the third Thursday every November. Ce n’est pas vrai, mon ami! This white charmer is made with 100% Chardonnay and is rich with flavors of apple and melon. Jean Paul Brun is the maker of this interesting wine, a steal at about $20, with the aroma and flavors of a $35 bottle. Which leaves the surprise. What a surprise!

Bottle number three was unveiled. Australia is the home to this grocery store bottle, Lindemans Bin 65 Chardonnay. Pear and apple flavors with a medium toasty finish make this inexpensive quaffer a real bargain. I know its a steal – I bought it at Publix for $5. Oh yes, $5. Although not the evenings favorite, we were all astounded at how well it held up with the rest of the lineup. For $5, it would be my perfect, I’m-making-dinner-on-a-Wednesday-night-and-need-a-couple-of-cups-of wine-for-my-recipe-and-the-rest-for-me glass. White Sangria? Check. At the pool? Check. After an ALTA tennis match? Check, Check Check. Bin 65 is Lindeman’s wine of the month, and that’s reflected in the $2 discount at Publix. Run, don’t walk and stock up for the hot summer months.

What did we eat with our Chardonnay lineup? Seafood of course. Shrimp scampi and this Spanish Caper, Olive, Pepper and Tomato Salad, along with Farro and a luscious Ratatouille. 4
Large Ripe Tomatoes
16 Cups Baby Greens
1
Cup Chopped Manzanilla Olives
1
Cup Sliced Large Capers
1
Cup Chopped Piquillo Peppers
½
Cup Chopped EACH Parsley and Cilantro
*Spanish Vinaigrette
Slice
the tomatoes and arrange them on a large plate. Toss the greens with the
dressing, vinaigrette and herbs. Layer them on top of the tomatoes and scatter
the olives, capers and peppers on top. Let sit for 30 minutes to allow dressing
to absorb into the salad.
*Spanish Vinaigrette
½ Cup EVOO
1 TB Capers – Chopped or
Caper Paste
2 TB Sherry Vinegar
2 TB Orange Juice
1 TB Dijon Mustard
Sea Salt and Freshly Cracked
Black Pepper to taste
Shake all the ingredients
together in a jar and taste for salt and pepper.

What’s better than friends, fun and good food and wine? Nothing!

I bought the wines at Publix grocery store, Costco and from Teresa at Sherlocks Wine Store in Brookhaven. Since I specialize in “SMART Wine” or wine that is affordable and delicious, you know I didn’t pay too much for any of the bottles I shared!