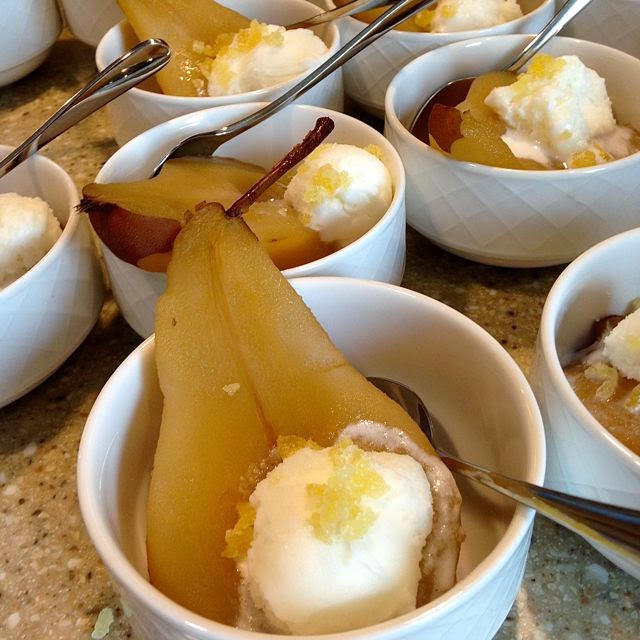 Don’t you love a recipe that evokes oohs and ahhs from your guests? This one qualifies. Bright flavor from the fruit, rich flavor from the tea and a hit of ginger make it irresistible. Bonus! Its easy to make – even ahead of time.

I had never tasted ROOIBOS (ROY-boss) until I visited South Africa. A beautiful red tea made from an indigenous shrub it has no caffeine, low tannins, packed with antioxidants and tastes great. What’s not to like? Its been imported to the United States since the early 1900’s and has recently become popular and easy-to-find in the grocery store. We’ve been serving it to our friends at Cancer Wellness as an iced tea with lunch. Garnished with a piece of orange or now that strawberries are in season, a big fat red strawberry hanging on the glass, and we get rave reviews.

It was the tea’s glamorous red color that led me to develop this recipe. I absolutely love wine poached fruit, and serve it often as a “lighter” dessert. This time though, I was looking for a non-alcoholic version to serve at a survivor class. I hit on the rooibos idea and began to research. I found quite a few recipes using lots of spices and sugar, like cinnamon and allspice, even star anise. Great ideas, but I wanted the rooibos flavor to shine.

Here’s my final recipe. I’ve made this dessert with pears and peaches, with and without the frozen yogurt, mint garnish or not, But the rooibos, molasses  and ginger always shine together to create a great ending to a good meal.

In a large saucepan, heat the tea and molasses until just boiling, add the ginger. Add the pear halves with cut side facing up. Reduce the heat to low and cook until tender, when the pears can be pierced easily with a skewer, about 8 – 10  minutes. Remove the pears from the sauce. (If the sauce is still very liquid, you may want to reduce it further by continuing to simmer it.

To serve, place the pear in a bowl and top with vanilla frozen yogurt. Drizzle the sauce over the top and garnish with fresh mint if desired