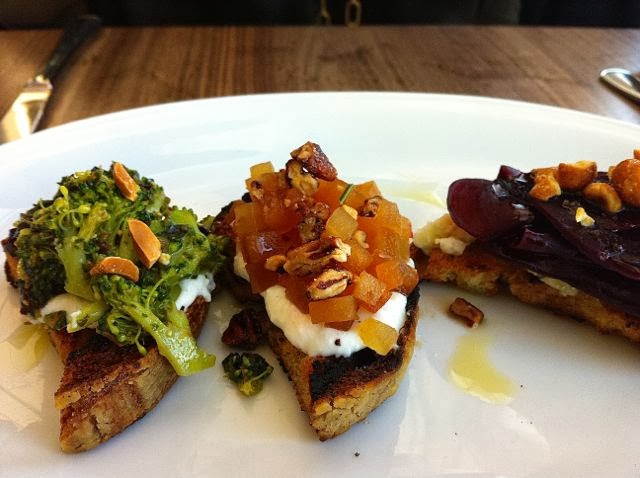 Who knew? Toast is the next
Kale, or at least it is to some of the food-trend-prognosticators that I
follow. So imagine my surprise, when presented a menu last week, with an
appetizer appropriately named, “Three Toasts”. (Don’t ever tell me Atlanta’s
food scene isn’t on the cutting edge! Or, ummm maybe the chef and owner Ford
Fry reads the same culinary journals I do?)
When the plate arrived it was
filled with…toast. Last year we probably would have called it Bruschetta, but
that’s so 2013 isn’t it?
From left to right in the
picture above, you can see Broccoli Pesto with Almonds, Ricotta and Pear and
the Gorgonzola and Beets on some rustic country bread. My favorite? Hands down
the ricotta and pear was the most interesting. Broccoli pesto was good – but
not inspirational. Gorgonzola and Beets? Brilliant, proving that anything can
top toast. But the idea of sautéing some teeny tiny squares of luscious pear,
crowning a bit of soft, savory cheese and then sprinkling on some toasted pecans is sweet and savory heaven. Here’s what I am going to do with Chef Fry’s good idea:
Sautéed Pears on Warm Goat Cheese TOAST for Two
1 Small Bosc Pear, just
barely ripe
1 TB Butter
1 Tsp Maple Syrup
1 TB Goat Cheese, softened
1 Slice Rustic Country Bread
1 TB Toasted Sliced Almonds
Peel the pear and cut into
small cubes about ½” on each side. Warm the butter in a small sauce pan and add
the pear and maple syrup. Cook and stir until the pear is starting to soften.
While the pear is sautéing, pop the bread into the toaster. When it is done,
spread the goat cheese over the bread and pile on the pear. Sprinkle with
almonds, cut the bread in half, and find a friend!
(I’m serving this tonight with a bowl of warm and steamy tomato soup!)