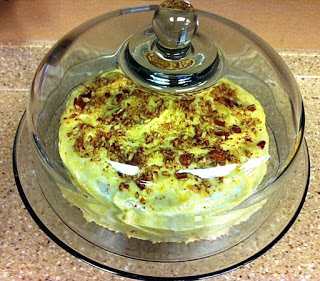 This was my mother’s recipe. Well, at least the name. Her recipe was full of fig jam, lots of sugar, eggs and butter. Of course it was good – but all that jam and sugar made it so sweet – my teeth hurt! As a Healthy Chef Partyologist my goal is always to make food better-for-us, so I decided that this delicious and moist cake was certainly worth a try.

I had to lighten up the sugar load as well – so instead of Mother’s Fig Jam, I thought of dried figs. Their sweetness and texture became perfect when I boiled them in orange juice, and the citrus brightened the taste and the texture became very jammy. Without all the sugar!

When I reduce the fat, sugar and calories in a recipe, I also ramp up the spices. Remember that herbs and spices have no fat, no salt, no sugar and no calories. (Okay, maybe a few calories.) Instead of just the cinnamon and nutmeg called for in Mom’s cake, I added Cardamom and Mace to the Cinnamon. The Mace is the outer covering of Nutmeg and it’s especially pungent and flavorful. The Cardamom adds an earthy warm citrus aroma and taste.

I love my “remodeled” recipe, cause you can make it into mini muffins for breakfast, bake in a 9×12″ pan and just dust it with powdered sugar, or go all the way like we did – by frosting it with the optional cream cheese frosting.
Hope you enjoy it as much as we did!