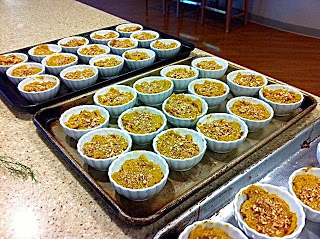 Last week, Intern Stacy and I traveled to Lawerenceville to present our quarterely wine tasting with the fun folks at Nikos. Leslie always has creative wines to match my menus – and participants learn so much by tasting and comparing the wines with each course. One of the favorites of the evening was a sweet potato gratin. (You’ll love it Gewurtraminer!)

Try this recipe with squash, pumpkin or sweet potatoes! I know you are probably thinking to yourself – I’ve had sweet potato casserole before – and its good but not great. Think again and try this recipe. Not only will you love it, but you will have raving fans asking for more. Step Two
Place the
squash into the bowl of a standing mixer. bowl. Add the brown sugar, butter,
orange juice, orange zest, cinnamon, allspice, mace and ginger and beat until
smooth.  Salt and pepper to taste. Place
the squash into 6 – 8 ramekins and sprinkle with the pecans. Place them under
the broiler until just browned.