How to Grill Octopus! 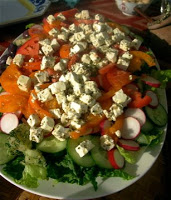 While visiting New York earlier this year, I saw an “octopus” trend. Every menu seemed to include an iteration of octopus. Grilled, sautéed – even blackened. After returning to Atlanta, I watched to see how long it would take before the many-armed cephalopod made it’s way to the south…It’s here! So, I couldn’t resist reposting a blog from the summer of 2009. Here’s my first attend at octopus wrangling, aided and abetting by my fun and intrepid sister, Pat. After rereading the blog – I realized that I didn’t share our wine choice for the evening. We drank a crisp Greek Assyrtiko – super refreshing for a hot summer evening. On our way out to the Eastern Shore of Maryland, we picked up some octopus at the Eastern Market in DC and we invited a good friend over for an adventurous dinner, lots of wine and stories.
The very good news: our briny buddy was cleaned at the fish market – Woo Hoo! Both my sister and I have enjoyed octopus in a variety of different preparations but, after deciding that it should be grilled, we set out to find out just how. I researched on the Internet – let me share with you there are some funky posts out there for cooking octopus! We couldn’t beat it on the rocks as they do in Greece. It didn’t sound right to just sauté it briefly and then grill – visions of rubber bands were floating in our heads. So, we decided to defer to the master of scientific cooking, (Harold McGee), and used his advice along with some hints and tips from Mark Bittman’s video blog to turn our slimy cephalopod into dinner.
First, my ever-intrepid sis cut off the arms and swimmers. (I’ve spared you a picture of this step – but basically she just trimmed off the arms and the webbing around them). Next, she blanched the octopus arms for 30 seconds in boiling water, and then placed them into a covered, dry cast iron pot, for about 4 hours at 200 degrees. Look at the beautiful maroon juices it gave off! (She used the juices to boil some potatoes, which were served on the side in a beautiful Greek salad). Finally, a quick turn on the grill to brown and caramelize the exterior and a bath in olive oil and spices. Our fun and delicious dinner was accompanied by Tzatziki, grilled flatbread and much laughter.

Here’s a quick and flavorful recipe for Tzatziki, a Greek Yogurt, Cucumber and Garlic Dip, great with flatbread, pita chips or raw veggies.

Step One
Place the Cucumber in a fine strainer over a bowl. Salt the cucumber lightly and leave to drain about ½ hour. Remove the cucumber from the strainer and place in a paper towel. Roll to remove moisture.

Step Two
Place the yogurt, garlic, oil and lemon juice in a bowl and stir. Add the cucumber, and the herbs. Salt and pepper to taste. Mix well and transfer to a serving bowl. Drizzle with oil and enjoy.