Healthy Slow Cooker for the Holidays 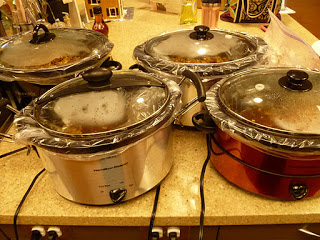 It seems like time just picks up speed as the holidays near. This calls for action! In this case, the slow cooker. (Sounds like an oxymoron doesn’t it?) Here are a couple of my all time favorite recipes!

Marinade ½ Cup Olive Oil 8 Cloves of Garlic Grated 1 TB Cinnamon 2 Tsp Cardamom 2 Tsp Cumin ½ Tsp Cayenne Zest of 2 Oranges 4 – 5 LBS Chicken Thighs, skinned 2 Cups Light Chicken Broth 1 Cup Dried Apricots, Chopped 1 Cup Dates, Chopped 3 TB Ground Almonds 1 Tsp Turmeric 1 Tsp Salt ½ Tsp Freshly Cracked Black Pepper Chopped Fresh Cilantro Sliced, Toasted Almonds Hot, Cooked Couscous (Preferably Whole Wheat) OR Quinoa Step One Place the oil, spices and zest in a large zippy bag. Massage to mix. Add the chicken and marinate at least 1 hour – or up to 8 hours in the fridge. Step Two Place the chicken and marinade in a large slow cooker. In a bowl, whisk together the broth thru the pepper and pour the mixture over the chicken. Step Three Cover and cook on low 10 hours – or high five hours. Serve on top of Couscous, garnished with cilantro and almonds. Healthier Maple Banana Bread Pudding 1 (12 OZ) Whole Wheat French Baguette, in 1” Cubes 2 Cups Evaporated Skim Milk 2 Large Eggs + 2 Egg Whites – Whisked Together 1/2 Cup Dark Brown Sugar, Divided 1 TB Vanilla ½ Tsp Cinnamon ½ Tsp Mace ½ Tsp Allspice 2 TB Butter 1 Cup Chopped Toasted Pecans 1 Cup Golden Raisins 1 TB Agave 2 TB Maple Syrup 2 TB Butter 1 TB Vanilla 2 Bananas Thinly Sliced Zest of an Orange Step One Place the bread on a sheet tray and bake for 10 minutes at 300F. Cool and place in the bottom of the slow cooker. Step Two Whisk together the milk, eggs, whites, half of the brown sugar, vanilla and spices. Pour the mixture over the bread in the bottom of the slow cooker. Step Three Use a pastry cutter or two knives to cut the butter into the remaining ¼ cup of brown sugar, until pieces are the size of peas. Stir in the pecans and the raisins. Sprinkle the mixture in the slow cooker. Step Four Cover and cook on low for 4 – 5 hours or until the center is set. Turn off the slow cooker and allow to cool for an hour. Step Five While the pudding is cooling, melt the butter with the maple syrup and agave in a large sauté pan. When melted, add the banana and sauté for a few minutes, or until the banana is soft. Remove from the heat, stir in the vanilla and the orange zest. Serve a spoonful of pudding as a base for vanilla frozen yogurt, and drizzle the banana sauce over the top.