Now, That’s a BOTTLE of Wine! 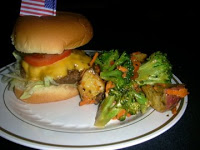 Wow! What a way to make a splash at a party. This bottle was brought to the Meals on Wheels “Friendraiser” I had the pleasure of participating in a couple of weeks ago. I had fun pairing my Roasted Ancho Potato Salad with Ted’s Montana Grill’s Bison Sliders. Which, by the way went great with the Big Wine!

The 2001 Flaccianello della Pieve is a Super Tuscan, made from100% Sangiovese, the same grape used to make Chianti. This wine is highly rated by both Wine Spectator and Wine Advocate – and I know why. It shines with a brilliant dark ruby red color and smells of dark berries, smoke and sweet cherries followed by a ripe dark berry taste with big tannins and a long aftertaste.

And the SIZE! The bottle that holds 20 regular bottles is called a Nebuchadnezzar. Not only is it cool to display and drink wine from a bottle this big, it is generally accepted that wine will age longer, more gracefully and uniformly in a large bottle. And what fun to have your picture taken with such a big bottle, you see that Nestlé’s Executive Chef, Ron Coneybeer is enjoying a glass with the collector who generously donated the bottle for the party.